CYCLE WEEK becomes the new national bike festival - and will take place in Zurich from May 12 to 15, 2022. The Bike Days and the Urban Bike Festival combine to form CYCLE WEEK, the festival to kick off the cycling season that covers all facets of cycling.

The origin of the CYCLE WEEK is based in the Covid-19 pandemic and the resulting challenges and opportunities to further develop events and try out new approaches. After the first edition of CYCLE WEEK and numerous discussions with partners, analyses of figures and surveys as well as the industry's wish for a platform that covers all aspects of cycling, it has been decided: the Bike Days in Solothurn and the Urban Bike Festival in Zurich will finally merge into CYCLE WEEK and will take place next year in spring at the start of the cycling season from May 12 to 15 in Zurich.

Bike Days and Urban Bike Festival are history
After three editions of Bike Days in Biel and one in Zurich-Glattbrugg, the 2009 Velofestival found a home in Solothurn. The area near the legendary Schanzengraben proved to be an attractive location for the festival. For eleven years, the Bike Days Solothurn have been the annual fixture for visitors at the start of the biking season and the meeting point for the biking industry, thanks to the involvement of the entire biking industry, attractive contests, but also thanks to the good cooperation with the local authorities, tourism representatives and partners. With the Proffix Swiss Bike Cup and the international dirt jump and BMX flatland contests, the Bike Days have positioned themselves as a sporting festival. In order to also focus on urban biking on a large stage, the first Urban Bike Festival took place in Zurich in 2016. A festival that focused on urban lifestyle, city biking and mobility topics.

Velosuisse also welcomes this decision: "After a great eleven years in Solothurn, the next stage of evolution comes with Cycle Week in Zurich, which combines Bike Days and the Urban Bike Festival. Velosuisse members are delighted with the new concept at the perfectly accessible location in Switzerland's largest city."

The evolution of CYCLE WEEK
The Corona shock in 2020, followed by the cancellation of both festivals, was a hard blow - but also opened up new opportunities. In May 2020 we realized the Urban Bike Festival DIGITAL, a digital realization in the form of an eight-hour show over two days. With the conviction that in the future there will be no way around digitalisation for events either, we set ourselves the goal of developing a hybrid event - the vision of the CYCLE WEEK was born, an event that complements and reinforces the various on-site experiences with digital measures. Thanks to the commitment of the City of Zurich until 2025, the newly acquired presentig sponsor Zurich Insurance and other partners, the CYCLE WEEK celebrated its premiere this year. The result is a festival that shows all facets of cycling: from MTB, gravel and road to urban mobility and safety. And all this in the middle of Zurich, Switzerland's economic metropolis, at decentralized locations that are as Corona-compliant as possible, on existing infrastructures, to be experienced on site and online.Despite difficult conditions (uncertainties due to Covid-19, postponement into the holiday season, supply bottlenecks in the bicycle industry and weather turbulences), the first edition benefited from the high visitor frequency (around 50'000) of the urban Europaallee directly at Zurich main station and from the interested bicycle testers, workshop and ride participants (around 5'000). In total, more than 35 million contacts were generated on site, online and in the media.

CYCLE WEEK - the new national platform for the cycling sector
There is an incredible dynamic in the cycling sector, be it in the technical development of new products and services, the range of tourist opportunities to experience the bike, but also the political pressure for more and also safe bike routes and framework conditions. Increased by Corona, people want to move more outdoors and are discovering the bicycle as an ecological and healthy means of transport for the city, leisure and sport. We would like to cover this multi-layered development within the CYCLE WEEK in the future. In addition to shows and contests, the festival will present the various developments to a broad target group and offer test opportunities, workshops and rides that will allow those interested to choose the right bike. The CYCLE WEEK is to be further developed into an annual meeting place for interested parties and representatives of the bicycle industry and attract new guests. The new concept and the experiences from the previous events form the basis for a strong, annual event at the start of the bike season. 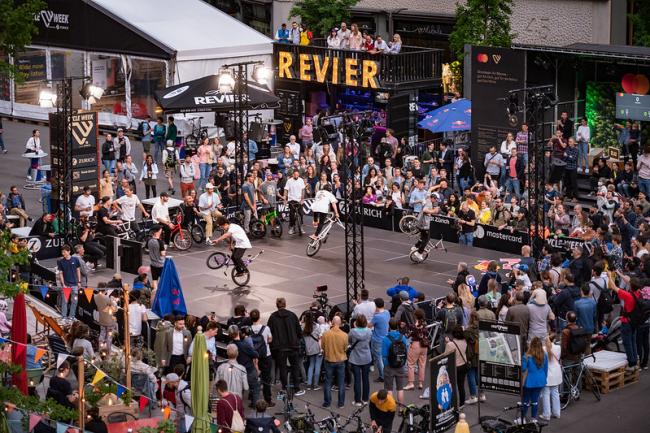 National Velo Festival exceeds all expectations
The CYCLE WEEK was a great success. From May 12 to 15, 2022, 75,000 visitors, cyclists, athletes and fans, the cycling and tourism industry and politicians met in the heart of Zurich for the country's largest cycling festival in gorgeous early summer weather. 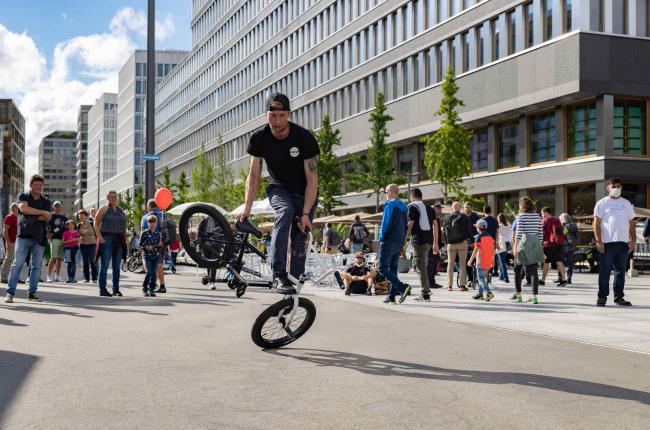 CYCLE WEEK 2022 - Big appearance for national bicycle festival
CYCLE WEEK is the epicentre of cycling in Switzerland. From 12 to 15 May 2022, cyclists, athletes and their fans, the cycling and tourism industry as well as politicians will meet in the heart of Zurich for the country’s largest bicycle festival.
Presenting Sponsor